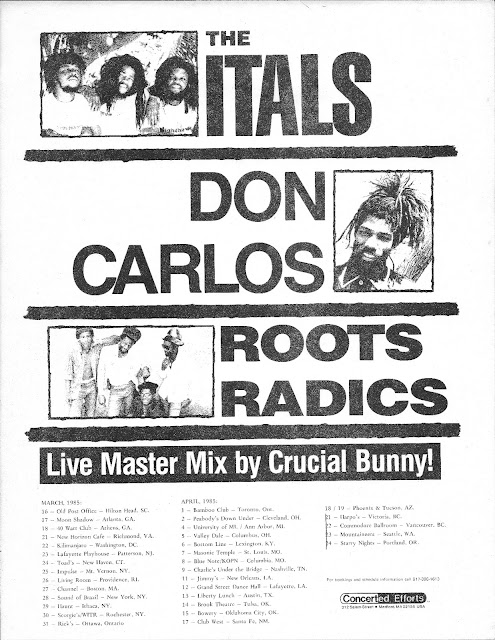 Posted by Unknown at 4:21 PM No comments:

Big up to Culture Yard! Israel Vibe and Roots Radics at Neumos,Seattle, Washington, USA, Feb 24, 2013
Posted by Unknown at 7:57 AM No comments:

From The Observer - review of February 15, 2012, Roots Radics' performance in Kingston, Jamaica.

Another great night of reggae in the park

JAMAICA Reggae Industry Association's (JaRIA) free weekly concert continued at Emancipation Park in New Kingston on Wednesday with a 'livication' (dedication) to dub poetry and the veterans. It was a rich musical treat.

Dancehall singer Triston Palmer, still sounding as fresh as ever, has not lost anything over the years. The 50-year-old set was short and spicy. He took time out to make a resounding plea to the generation of entertainers who came after him.


"You have some yute weh come inna di business and dem waan mash it up. Wi nah call nuh name, wi not cussing dem. Wi only a tell dem sey, keep the music clean 'caa (because) other kids coming. And wi can't take the dirty lyrics and the unda dis and unda dat," exclaimed the singer, before he segued into his vintage hit song Entertainment. This was the song that brought him to the attention of producer/deejay Jah Thomas.
Palmer also rocked the event with his 1982 Greensleeves standards Joker Smoker, Prophecy and Good Sensimina. He ended with a shortened version of Save the Last Dance For Me.

'Muta' made his grand appearance in a regal African robe accompanied by Abba Zero, who was similarly attired holding colourful umbrella over the head of the poet.

"Will you please stand. First, allow me to introduce myself. My name is Judge One Thousand Years. Some people call me Judge Better Mus Come. I am from Africa and ah come to try all you politicians, preachers and badman for selling out black people," Mutabaruka began.

The high point of Mutabaruka's set was his tribute to Bob Andy. "Bob Andy is the greatest songwriter coming out of Jamaica. The other day dem have a tribute to Bob Andy and we were forced to write a poem for Bob Andy. But we couldn't write something out of our head, so what we did, we took couple of Bob Andy's songs and put them together as one poem. Weh dem call a collage..." he informed the audience gathered in the popular green space.

With that said, Bob Andy appeared on stage singing his hit Feeling Soul which provided the score to Muta's presentation.

Another powerful segment of the evening featured the Roots Radics Band backing singer Deh Deh on No Vacancy and I don't Want to Be Lonely. But the portion of the programme dedicated to Gregory Isaacs was the most exciting. It featured Junior Sinclair imitating the late Cool Ruler in dress, attitude and sound. He outdid himself with such renditions as Boarder, Night Nurse and Tune In. Bongo Herman too made his presence felt as usual utilising his various percussion instruments, as well as vocals, on Rastaman Chant and Rocksteady.

Earlier in the programme, local pioneer of dub poetry Oku Onoura gave yet again another satisfying performance as well as Jah Mason, the Blue Print and Kurfew bands, and the reggae vocalist/deejay duo Bruossai from out of France.

Read more: http://www.jamaicaobserver.com/pfversion/VIDEO--Another-great-night-of-reggae-in-the-park_10803448#ixzz2MrZ5dbJ1
Posted by Unknown at 9:11 AM No comments: 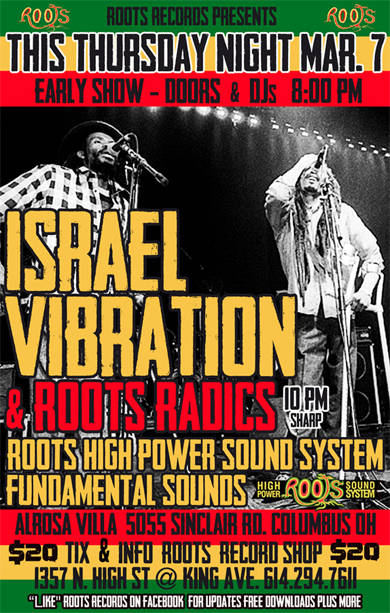 Posted by Unknown at 3:57 PM No comments:

For most recent news letter -
http://rootsradicshq.blogspot.com/2012/11/roots-radics-news-october-2012.html